The 85lb colossus is so ferocious that most of his training has to be conducted with him wearing a muzzle for the safety of the trainers.

Zion features in the new season of Barcroft TV’s hit online show Dog Dynasty, which has racked up hundreds of million views across YouTube, Facebook and Snapchat.

Owner Marlon Grennan, of breeders Dark Dynasty K9s in New Hampshire, said: “He’s absolutely not a dog that you want to mess with, he just wants to bite someone, he’s an assassin.

“If he bit you flat on the forearm he’d probably break your wrist, that’s the type of power these dogs possess.”

And Grennan says that Zion’s lower public profile compared to some of his other dogs has been an intentional strategy in order to retain the element of surprise against any unwanted intruders.

He said: “Zion may be one of my lesser known dogs, but don’t get it confused, he’s a genuine Hall of Famer, he is an original.

“He’s lesser known for a reason, I didn’t really want people to know much about him.

“What makes Zion different is the level of training he has.

“I trained him during a different era of my life when I legitimately needed protection, so he has some techniques my other dogs don’t have.”

Zion’s savage side means that much of the protection training requires him to wear a muzzle to avoid him biting the trainers for real.

Grennan said: “He is the real deal, he’s the son of two of my original dogs Maia and General, the last of a classic line.

“You can see when he’s training that he’s constantly trying to slip the muzzle off, because he wants to bite for real.

“If you take that muzzle off then it’s a whole other ball game. He is willing and ready to bite for real.”

Dog Dynasty follows the fortunes of Hulk – who weighs a staggering 175lb - and the other DDK9s protection dogs, whose puppies can sell for anywhere up to $25,000.

This season also sees Hulk hit Miami, Florida, to meet celebrity rapper Swae Lee, wave goodbye to beloved DDK9 original The General, and gives the audience a glimpse into what it’s like to actually take a bite from the Hulk. 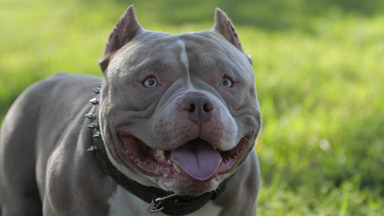