ONE HAPPY dog had a rough start in life, after being diagnosed with a fatal disease

Murray the Weimaraner was found as a puppy with his three siblings on Dead Dog Beach in Puerto Rico.

The name 'Dead Dog Beach' is attributed to this spot because it is a well known dumping spot for stray animals.

Whilst in Puerto Rico, Murray and his siblings showed signs of distemper, a virus that is fatal to most dogs as it affects their respiratory and nervous symptoms.

Luckily, Murray was rescued by The Sato Project - a canine charity dedicated to saving abused and abandoned dogs on the beach - and transported to the USA to be adopted.

Sadly two of Murray’s siblings did not survive.

Murray was due to be euthanised, however after a wag of his tail - the vet changed their mind and did what they could to treat him.

Due to the virus, Murray now has no teeth, causing his tongue to flop out of his mouth.

He also has bone deformation that makes him look a little different.

But this didn't stop him from being adopted by Mackenzie Gallant and her family.

She said: “The signature tongue out is just the cutest thing, and his crooked features, if you look at his face closely you notice his ears aren’t aligned right on his head.

"His quirks make him even cuter and more special."

The pooch is now happily living in Massachusetts with his human and canine family.

Murray’s human sister, Mackenzie, set up an Instagram account for the unusual pup - to raise awareness of the condition and the importance of adoption.

She said: “We made his Instagram when I left for college for friends and family to follow but over the past year he has gained a lot of followers and helped raise awareness of rescue dogs, The Sato Project and distemper."

The pup has gained quite the following, and proves that being different is also beautiful.

Mackenzie said: “Murray is so special because of his personality, he is a survivor and has no idea anything is wrong with him and is always happy and wagging his tail. He does and tries to do everything with his doggy siblings.

“We can’t imagine our lives without Murray and are grateful to The Sato Project, and all that they do for the unwanted dogs in Puerto Rico." 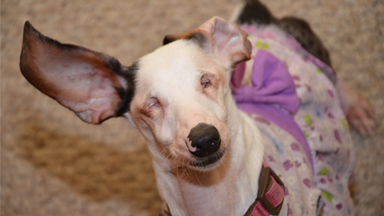