A DOG breeder from California claims to have resurrected a breed of ancient giant guard dogs, weighing over 200lbs

The 18-month-old beast is the result of Marcus’ mission to bring back what he calls the ‘Old World Molossus’ breed; dogs which are said to have guarded the leaders of the ancient world around 5000BC.

Marcus told Barcroft Studios: “When people see Sasquatch, usually it is shock to be honest. Jaws drop. People are in shock and amazement when they see these giant beasts.

“When it comes to their body mass, bone structure, and overall size these dogs were never matched thousands of years ago and to this day they are unmatched.”

Yvette, Marcus’ wife and co-owner of the dogs, added: “We have people turning their heads all the time, people stopping in their tracks and they’re just like, ‘What is that?’

“I have video taped people’s reactions just because they are in shock and awe so it’s quite a thing.”

Marcus now sells ‘American Molossus puppies’ for five thousand dollars, but there’s a long waiting list for one of the rare pups.

The realtor, author and dog breeder gained attention in 2018 for breeding the ‘world’s biggest puppy’, ‘Old World Euphrates’ – a member of the American Molossus family who now belongs to an owner in Utah.

Now, with Sasquatch, Marcus has his own impressive beast to rival his former pup, with four registries recognising the American Molossus as a distinct breed: the USBR, ADF, DBR and UBBR.

Despite his young age, Sasquatch has already outgrown some of the larger Mastiffs Marcus had encountered, which reached around 190 pounds at their biggest.

“We were expecting Sasquatch to originally be 185 to 200-plus pounds,” said Marcus. “Being the fact that he is young and already 212, we are expecting him to be probably around 220 pounds by four years old.”

Sasquatch’s littermate, Sheba, who was bred by Marcus and now lives with a family close by, has also reached 200 pounds at just 18 months.

To create his unique dogs, Marcus, who has been breeding since 1999, began by looking at statues, clay tablets, and paintings displaying a prehistoric beast which appeared to be used as a guard dog for the rulers of antiquity.

Yvette, said: “When Marcus decided to resurrect this ancient breed I thought he was crazy. I didn’t really think that it would become what it is now. It has just kind of blown up.”

By using the Old English Mastiff and Napoleon Mastiff, both of which he says have a direct link to the Ancient Molossus, Marcus was able to create a line of dogs that resemble the old-world giants.

“There are temperament differences in the breeds,” explained Marcus. “With English Mastiffs being a more passive dog and Napoleons being more of a tenacious stubborn alfa dog.

“You have to focus on the guardianship and the attributes of the dog and try to blend them together. These dogs are bred to be a close guardian and get in between you and an intruder and scare them away.“

Marcus’ process involved breeding dogs that displayed the kind of attributes the Ancient Molossus was known for: an even temperament, intimidating looks, and a social nature that can quickly turn menacing when faced with a threat.

It’s this mix of intimidating looks with an even temperament that Marcus says makes the American Molossus one of the best guard dogs available.

“The dogs are dangerous if a person means harm,” he explained. “They were bred to defend like a giant security dog. If somebody comes into the property and means harm I would hate to be him.”

Marcus and Yvette do basic obedience training with the dogs before they’re provided to families, and say they have no concerns about the breed, despite the dog’s imposing size.

Yvette said: “I’m not scared of the dogs. To me, they are giant teddy bears. I would say that the concern is just their girth and how massive they are. So one thing that we very importantly try to teach our dog is not to jump because they have jumped on me before and knocked me down.”

Marcus added: “I’m not concerned with the American Molossus or Sasquatch or any of them when it comes to being around any people or children because they can be very gentle.

“We have had one incident when another owner unfortunately let their Rottweiler go and the dog attacked the Molossus and unfortunately it was pretty bad for that dog.

“The good news is that the Molossus is intelligent and stopped, and there are witness to see that the dog wasn’t the aggressor, it did its job defending the owner.”

For now, Marcus and Yvette are focused on producing more Molossus puppies, with Sasquatch as the prototype.

Yvette said: “Who comes first between me and the dogs? That’s actually an easy answer. It is definitely the dogs. We eat and sleep American Molossus all day.” 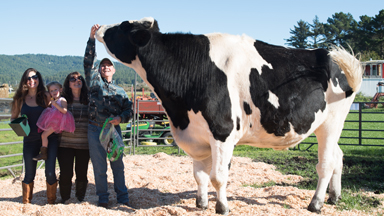 Humongous Holstein To Take Record For The World's Biggest Cow 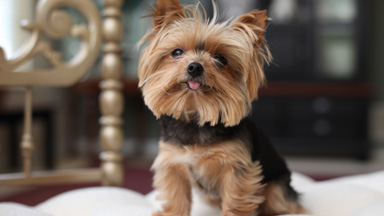