28-year-old field guide, Daniel Bailey, positioned his camera just metres away from the awe-inspiring attack in the middle of the MalaMala Game Reserve, South Africa.

As the giant hippo tried to find its way to a limited supply of water, in the dry month of May 2018, two male lions just happened to be sleeping on the ridge line above.

With the hippo racing around, the male lions were alerted and called for their pride as three lionesses quickly approached the scene, along with four of their cubs.

The adult predators went to work, trying to take the distressed hippo down by biting and clawing at its back.

Described as ‘never-before-seen action’, it seems as though the hungry pride bit off more than it could chew on this occasion, as the hippo battled to safety.

Daniel told Barcroft TV: “In all the years I’ve been guiding as a ranger, I’ve never seen an altercation or attack like this.

“This just isn’t the norm, lions hunting a hippo.

“I think the lions fancied their chances because the hippo had been injured in an earlier territorial attack with another hippo.

“Seeing an injured giant and a lack of water, I think the lions thought it was an easy chance to take something down that big, that would provide food for their pride for a long time.

“I believe I won’t get to experience a similar scenario to this again.

“The lions certainly bit off more than they could chew.”

Hippos can weigh in excess of a whopping 2,000kg, according to Daniel.

“Hippos are extremely strong and possess lethal weaponry themselves in terms of their sharp upper and lower incisor teeth,” Daniel said.

“For this reason, the only chance the lions had, would have been to really exhaust it by severing its spinal column over the course of many hours.

“They obviously tried this at first, by jumping all over its back, biting and scratching.

“But I believe that because the hippo was close to some kind of water, its natural habitat, it was able to shrug them all off and become comfortable with its positioning.

“This was the turning point for me, when the hippo was able to back away to the water. The lions seemed to become out of their depth very quickly.”

The whole event took several hours to unfold, but the attack itself lasted only a matter of minutes.

Daniel said: “It was very drawn out with the lions sussing out their approach.

“But the attack itself was short. The lions were hanging on its back for a matter of minutes, before the hippo shrugged them off.”

Thankfully, Daniel carries his personal camera with him while working around the reserve, enabling him to capture the unique confrontation.

“I was with a number of guests as we watched on and got our cameras ready,” Daniel continued.

“I think a lot of them, like myself, were in awe of what was happening. There was so much excitement.

“When people watch the footage back now, they’re always amazed and in disbelief.

“I’m ecstatic that we managed to capture all the footage and show the full progression of the attack from start to finish.” 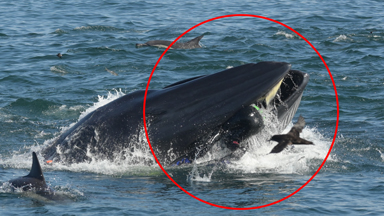